As February drew to a close, there were only two recorded fish; one landed on the 11th and the second squeezed in on the last day of the month. As of the 15th of April, we are on 16 salmon and 24 sea trout – a fantastic spring so far!

March started as February ended with storms and floods and it was difficult to persuade rods try in these conditions.

Despite this a 10lb fish came to hand during the first week of March, a fresh specimen from the Tail of the Gurl. As March continued the second week saw more settled water heights although the water still ran at a high level and was often coloured. The second week saw two fish of 7lb and 8lb come to hand from Tippeny and Napiers respectively. Both fell to a Willie Gunn Waddington and were shining new. Somewhat unusually two seatrout of 2-3lb were also landed.

The third week of March saw some further seatrout making an appearance.  Five between 2.5-5lb were recorded as also two fish. These were larger specimens of 12lb and 14lb the better being encountered by Frank McDonald in the neck of Pipeline.

This trend continued throughout the latter part of March enhanced by the water continuing to fall to our preferred level and benign weather more typical of the Algarve rather than Auchterarder. Five more seatrout came to hand (2.5-3lb) as also three more fish 8lb and two at 10lb. The Machany, Houstons and the March were the productive pools. Two of these fish were sea-liced!

Having retrieved matters somewhat in the latter part of March, the weather gods blessed us with bitterly cold northern winds, storms and snow again. C’est la vie.  We shall however endeavour to persevere as summer approaches.

The last two days of March saw two further fish coming to hand. One of 7lb from the neck of the Gurl and a 9lb fish from the Green Hut pool. Two further seatrout of 2.5lb and 3lb were also landed.  The 1st of April saw the thirteenth fish of the season being landed, a 10lb fish from the March pool.

Water levels are now settling in with consistent weather and we hope to bump into a few more fish. 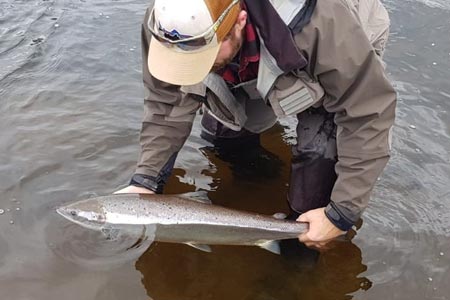 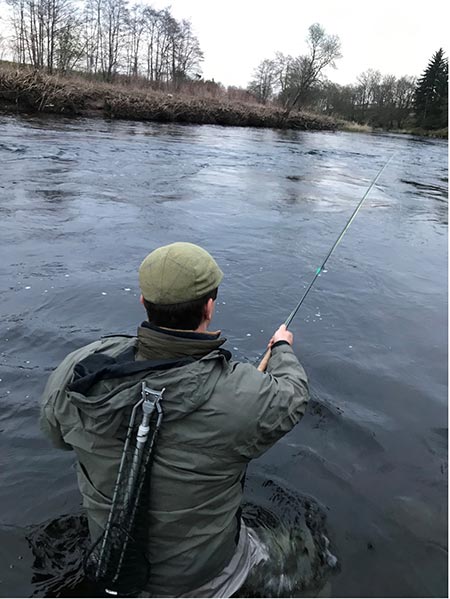 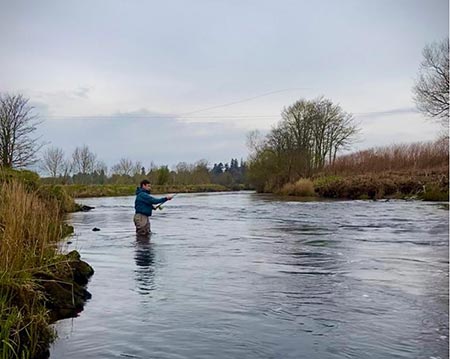