Secrets of the Weir Pool

The Weir is dramatic and impressive particularly at a good flow when the white water cascades over the rocky barrier. The nearby property, Cruive Cottage, gives a clue to one of its previous purposes. To explain, a cruive is the Scottish name for a traditional fish trap. The cruive at the Weir was probably in use until at least the late nineteenth century and there are many anecdotes relating to its uses.

In the period prior to agricultural mechanisation, armies of farm labourers and their families toiled on the farms and fields of landed estates of which Strathallan was no exception. Their terms of engagement provided for a degree of support and sustenance by the estate and in the case of Strathallan much of this came in the form of salmon from the river, particularly in the autumn.

When the fish were running an estate worker was instructed to man the cruive leaving the stable at the castle with a horse and cart which he parked at the slope above the Weir where Cruive Cottage now stands. As the fish made their way upstream, they would be funnelled into the chamber set in the Weir by wicker screens from which they were unable to reverse or retreat. The attendant would remove them by way of a cleeck (gaff) or net, and having killed the fish, it would in due course be placed in the horse-drawn cart. This activity would continue as long as the fish were running. There are reports that when the fish were plentiful, the whole cart was filled with fish so that the attendant was obliged to walk behind the cart as the horse pulled it homewards, throwing back on the fish that had spilled off the raised sides. Little wonder then that countrymen in those circumstances protested that they could not tolerate being fed salmon continuously when there was such a glut.

There was also a section of the Machany Burn which flows through Strathallan Estate known as “the larder” which was operated for the same purpose in previous times. Here a shallow pool with an even, snag-free bottom had a thick trammel net placed across the neck of the pool to prevent fish from ascending further upstream. When a good number of fish had accumulated, a gang of farm labourers brought another similar net with which they spanned the tail end of the pool. By wading steadily upstream with the second net they would gradually confine all the fish in a narrow space where they could be removed with ease. This custom though effective has not been in use for many years and would no doubt earn you a visit to the sheriff in Perth if you were discovered. 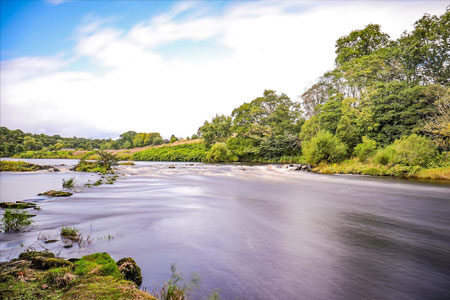 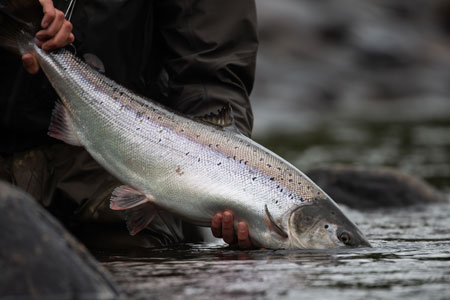