The name of this pool immortalises a notorious lurcher dog by the name of Tippeny or Tuppence, the constant companion of the amiable and celebrated Frank Shortt of Belfast who fished with my predecessor Tom Adamson, during the 1960s and 1970s. Frank Shortt was the scion of the famous Shortt family of Belfast, industrialists, engineers and entrepreneurs. However, it had become clear to the family that although gifted in many ways, Frank had no head for business. The family were happy to provide him with a regular and generous allowance to hunt, shoot, golf and fish and whatever other pastimes amused him, provided that he would never involve himself in the activities of the family business.

This arrangement was well suited to Frank’s disposition. He adapted the lifestyle of an international playboy for which he was eminently suited and in due course his footsteps brought him to Kinkell which he patronised  for a number of years.

There was only one circumstance which was not entirely to his satisfaction when he visited Kinkell;  namely, the Scottish Law forbade him from fishing for salmon on the Sabbath. In Ireland, it was permissible so to do after church attendance.

Frank, however, intended to devise a means by which he could overcome this obstacle.

To the dismay of my predecessor, Frank would make his way up to Pool 5 on a Sunday from where any approaching person could be observed a long way. He would walk up ostentaciously with trout fly tackle mounted (although somewhat frowned upon, it was not illegal to fish for trout on a Sunday in Scotland).

He had already hidden his salmon tackle in the long grass adjacent to the banks of that excellent and productive pool. Having made these preparations, Frank, closely attended by Tippeny his lurcher, would proceed to extract salmon after salmon, secreting them in the long grass behind him. If anyone approached the happy pair as near as 400 yards, the dog would emit a low persistent growl allowing Frank to dispose of his salmon gear and replace it with his trout wand.

This perfectly viable modus operandi worked wonderfully well and although Tom Adamson’s distress was palpable, Frank Shortt was always delighted with the outcome.

In honour of the lurcher’s notable contribution to the capture of so many fish on the Sabbath for many years, it was eventually decided that the pool where these activities took place, should be named in his honour. 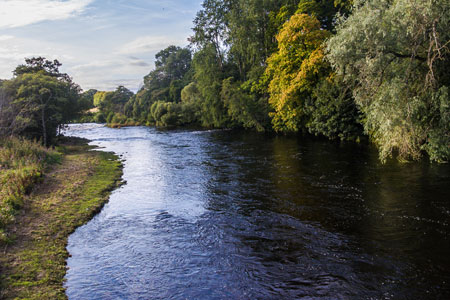 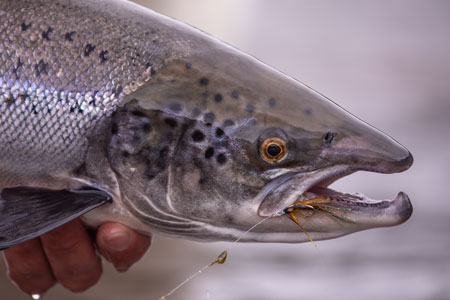