A “tail” of two halves

June proved to be a difficult month at Kinkell initially. Although we started with satisfactory water with heights around 0.6 m there seemed to be little evidence of the presence of sea-trout in any numbers at the time of year which is usually the prime time of the sea-trout season. Those that we did meet proved to be adept at shedding the fly.

The water continued to fall as the month progressed, due to warm weather, lack of rain and also the activity of the Hydro Board and agricultural intents requiring the irrigation of growing crops. By the second half of the month, water levels fell to 0.44m and day time temperatures reached 24 degrees Celsius at times. Those who fished later on into the evening fared little better, although one angler, David Fairlie had the exciting episode of accidently hooking a beaver!

However, as the last days of the month approached we benefitted from a series of small spates which lifted the water height to in excess of 1m and it settled out to a consistent height of 0.8m. There was happily a response and a number of fish appeared during the last days of June.

The most productive section proved to be the Murrays where the height was ideal. Middle and Lower Murrays shared fine fish with the March registering one and the Machnay also one. Fish ranged from 8lbs to 14lbs with an average of 10lbs such as the one caught by Hugh Wilson in the Upper Murrays. All fish were fresh and fell to the fly.

As we move into July, a brighter, windy period of weather dominated conditions with water levels returning to 0.6m again. 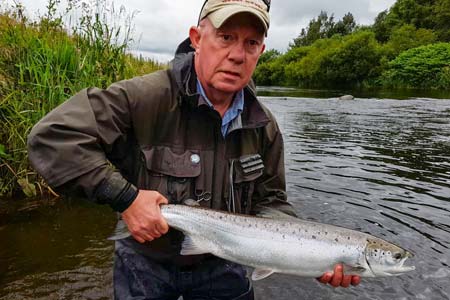