The Salmon have started to arrive!

Having picked up the first fish of the season in the dying days of February, this being the earliest that the river was fishable, we looked forward to April with some optimism.

However, as my earlier reports indicated, water height and weather conditions always determine our chances of success. Reasonable fishing conditions prevailed during the first week of March 2021 and two fish came to hand. One gentleman found a 12lb sea liced springer in Tippeny with a brass tube Willie Gunn and the Ghillie added to the score with another sea licer of 8lb on a Willie Gunn Waddington from the tail of Gurl. A good Sea Trout of 4lb also came to hand. The water height throughout the week was between 1m – 1.5m, but only briefly at the higher level, thus providing reasonable conditions. A light, favourable SW wind also assisted our efforts.

Settled weather conditions continued in the week commencing 8th March with the river continuing to settle at a height of one meter or less. The pleasant warm weather and a SW breeze also assisted. Two fish were landed. An 11lb fish from Middle Murrays and one of 9lb in Tippeny, both on Willie Gunn Waddington.

During the week commencing 15th March one of our guests met a lovely 10lb fish in the Pulpit using a Vision 110 bait. He landed an identical fish later in the week using the Willie Gunn tube fly whilst fishing the Machany Pool. The fish was fresh with sea lice. Next to be landed was a 7lb hen fish on a Tosh Waddington. This fish came from the Green Hut pool and also carried sea lice. Lastly, a 14lb sea licer from the Machany Pool, again on a Willie Gunn Waddington, was landed.

The following week, 22nd – 27th March, provided good conditions and pleasant weather initially, however it deteriorated greatly as the week progressed, becoming stormy, cold, and wet. This unsettled weather continued into the week commencing 29th March with more heavy rain and gale-force winds. Flooding throughout the week rendered fishing impossible, a situation that continued into the early weeks of April. 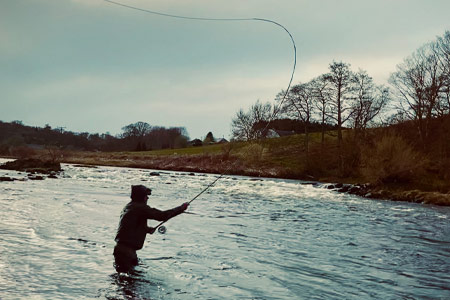